Ben Wyvis is often overlooked by many as being a bit uninteresting. The standard route from Garbat is pleasant enough, starting with a gradual ascent through woodland along the Allt a' Bhealaich Mhoir. The ascent up to An Cabar is steep and on a very well laid path. There are decent views from the top but it is often very busy. A much more interesting, but longer, route starts at Loch Glass...
Starting at the parking area at Eileanach Lodge (it's worth noting that the dogs that reside at the Lodge can be a bit feisty so it would be handy to get a pole out here to protect your ankles) there's a 2km run to Loch Glass on good forestry tracks.
It's 6km on good flat ground to the end of the Loch, you will see Wyvis Lodge at the far end which is available to hire if you have a few grand going spare. You can continue to the lodge and take the track which takes you to the Abhainn Beinn nan Eun or take the track on the left before you reach the lodge to Corravachie. Either way follow the river for another 2.5km. Take a left on a good track, this is where the uphill starts... After just a few dozen yards take a left onto a trodden track, it's tempting to stay on the good track here but that heads over to the A835..
The track is boggy in places and this is where poles come in handy. A lot of this part of the route will be mostly walked. There is around 700m of ascent over the next 5km, some which is runnable. There is a faint track leading all the way up to the summit of Carn Gorm and then Tom a' Choinnich. The terrain changes from heather and moss to rocky underfoot. There is the potential to do some anke damage here so it's worth taking your time.. You will also come across a wall which seems very
out of place in such a wild looking place.

The trail up to Tom a' Choinnich is a runnable zigzag which will seem very pleasant after the rocky terrain which preceded. From here you have a choice, continue to Glas Leathad Mor or head NE to Glas Leathad Beag. I took the letter which led to some excellent running on soft grassy ground.
This is the best part of the run and should be enjoyed.. If you do head to Glas Leathad Mor, then retrace your steps to Tom a' Choinnich before heading to Glas Leathad Beag. This is where the descent starts. Head SE to Meall no Drochaide, the terrain here gets a little interesting. The ground underfoot is very uneven where deer have dug it up to make shelter out the wind.. It's just a case of finding your own way down from here. There is a muddy track which takes you through the trees and back down to Loch Glass. Poles are definitely worthwhile here, and the best thing to do is just go for it.. On a hot day a swim in the Loch is a must before heading back to the parking area...
Length: 27.8km
Ascent: 1131m
Strava Link 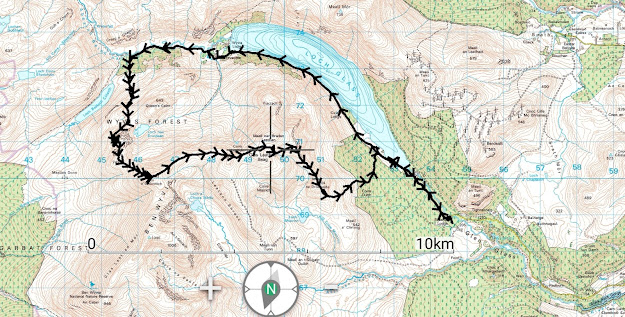